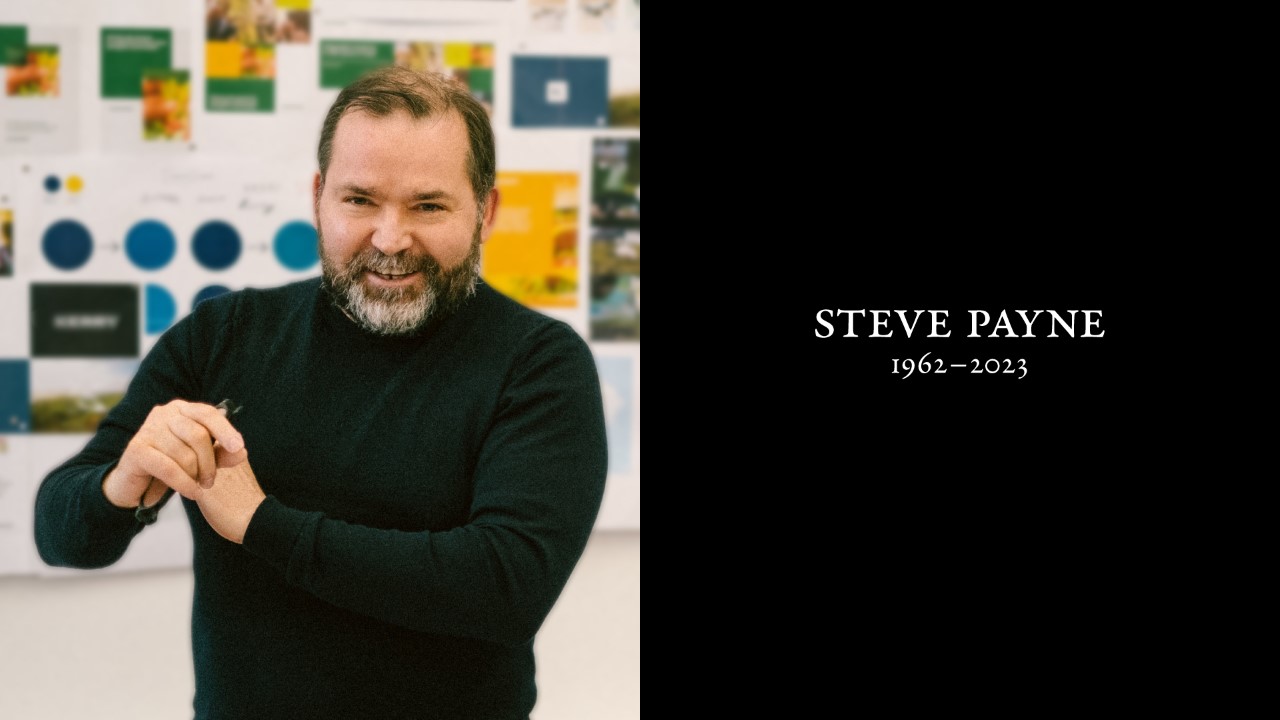 Steve. Calm, considerate, thoughtful. With a desire to make everything around him better and the best that it can be. A friend, mentor, sounding board, co-creator, instigator and a touchstone for setting the standard in ideas and what they can become.

Twenty years ago, Steve joined Enterprise IG which became the Brand Union. It was here that he forged many relationships in Ireland and helped to inspire, mentor and guide clients and creatives, including myself. In these early years, every introduction with a new client was that he ‘was just off the boat’, establishing a sense of humour and fun in everything he did. However, just off the boat he wasn’t. He had an enviable back catalogue of brand identity programmes, awards and experiences that stood him far apart.

Steve had worked at Saatchi Design, followed by a role as Design Director at Newell & Sorrell. At the time, Newell & Sorrell was one of the places to work in London, creating ground-breaking brand identity projects, that Steve led for the likes of Selfridges, The National Lottery, Barclays and the infamous British Airways rebrand (Steve fondly talked of Margaret Thatcher’s handkerchief being placed over the tail fin and making the headlines). Following this, in 1988, he moved to Australia and joined the Organising Committee of the Sydney Olympic Games as Design Director, and subsequently FutureBrand.

As a younger designer to Steve, I was fascinated by these larger creative branding programmes. I had seen them in the D&AD Annuals, I read about them and while at Enterprise IG in 2002, his CV landed (however, it was pretty poorly designed – in Word no less, and with shocking indents and spacing). Steve came to meet Jim, Peter and myself, and with him was a tatty, felt black bag (something that seemed to be part of his identity ever since). It contained a treasure trove of brand guidelines, projects and experience. What a gift to be able to work with the person who had created these, to learn from him and ultimately enjoy a lasting friendship over these years.

One of the first projects we worked on together was the rebrand of Bank of Ireland. Enterprise IG had just won the account in Dublin and Steve was ready to lead the project. Little did we know that Bank of Ireland had just finished working with Interbrand in London, where Steve’s identical twin brother Andy worked – and, at the very first meeting, to the surprise (or horror) of the client they thought Andy had joined us! Apparently, Steve and Andy swapped roles quite easily – but those stories are for after the watershed.

Over the coming years, Steve would be the creative lead on some of the most significant rebrands in Ireland, including the GAA and National Lottery. As his role evolved, he eventually led Brand Union in Ireland to become more strategic and client-led. We drifted from each other while our careers and priorities changed. Unfortunately for Steve the coming years were to become unkind.

It was not until 2015 that our paths crossed again. Steve and his wife Tara came to ours for a summer house party and we talked and chatted into the early evening – great fun. Steve was starting to feel strong again and was keen to work, and for the next few years he came on board as creative consultant to RichardsDee. This suited Steve, Celine and myself well – Steve could find his feet again and focus on projects without the pressure of client responsibilities, giving him space to work with the team and to think more strategically on projects. One of these was a brand strategy project for Dublin Bus, who were evolving their brand following Transport for Ireland’s decision to roll out its own brand across Ireland. This was a perfect project for Steve, bringing his international knowledge, his warmth and fresh and bold thinking to the table – however, his idea to use an Irish animal on each mode of public transport did not see the light of day.

From 2017, Steve became a full-time member of the team. It was a delight to have him join Celine and myself and for him to be a sounding board for us, central in shaping our positioning and being able to be objective and reasonable when we were having to make tough business decisions. Steve saw the opportunity in everything, in every project and every person. He was able to set creative projects for the company that everyone could take part in, whether it was creating a mask or a record cover that inspired you – Steve always went out of his way to make sure that his own solutions to these projects were above and beyond. It was this vision, creativity and energy to do good that helped inspire our Creatives Against Covid-19 project, which had a profound impact on the design community and charities we fundraised for.

While his training may have been that of a designer, his wisdom, curiosity and ability to think big enabled him to play key strategic roles. Steve could bring a unique perspective, he was analytical but had that design and creative sense to always ask what if or why not? Steve and Celine developed a strong relationship quickly. Jim, Steve and I had a trusted kinship and together we went on to collaborate on projects for Kerry, National Broadband Ireland, House of HR, Irish Water, The Talent Club, Dublin Bus and BASF AG USA.

One of Steve’s biggest impacts was on the people around him, he was adored by our team. He had time for everyone and could help tap into the thinking of designers to uncover a deeper and stronger idea. Steve was a traditional designer at heart, in search of an idea, creative metaphor or play on words to bring to life a solution that had wit, style and interest. While his tool of choice (PowerPoint) may not have been the most effective, his thinking most definitely was.

He was constantly interested in design and the ways creativity is expressed – art, photography, writing, film etc… this always inspired me. Steve stayed enthusiastic about his craft – a genuine show of loving what you do and proving that your job can be your hobby. I think this was the case for him because he loved to work and to be set a problem to solve.   Over the last year, and post his unfortunate stroke, Steve came back to the studio for a few days a month. He relished reconnecting with the team, and lit up being around creative projects that needed a solution. But in truth, Celine, the team and I benefited far more than Steve. When Steve was around there was a sense of calm, another leg to the stool and another kindred soul trying to make people, the work and our environment better.

There are very few people like Steve (apart from his brother) and he made his mark – on people, on clients, on brands and on many individuals who are all the better for crossing his path.

We will miss him dearly.

To fulfil Steve’s final wishes for his children – Grace and Charlie – we have set up a fundraising page, should you wish to donate.

The Biggest Show on Earth